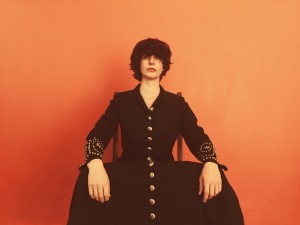 Lauren has toured internationally with Okkervil River (2008-2015) and The Octopus Project (2015 – present). Her discography includes three albums with Okkervil: I am Very Far (2012), True Love Casts Out All Evil (2010) (with Austin legend Roky Erickson), and The Silver Gymnasium (2013), and has performed on Late Night With Jimmy Fallon, Late Show With David Letterman, and Conan. Gurgiolo has directed/ co-directed three inter-media installations; Calculated Carelessness, The Quality or Condition and SONO LUMINESCENCE and is currently working on her fourth, Silent City. She has two corresponding releases with her project The Dialtones; The Quality or Condition and Calculated Carelessness.

As a toddler, Wendy cried every time she heard You Are My Sunshine and was very particular about nighttime stuffed animal placement. Many years later, she studied Art and Art History at The University of Georgia, wrote a lot of songs, and eventually moved to Austin, TX. There, she quickly realized that Ctrl+Z was much more efficient than a Kneadable Eraser. Since then, she has worked as a graphic and web designer/developer, animator, writer, song-crafter, production designer, and general creative problem-solver (myownroommedia.com).

She once wrote a column on Austinist.com (Hello, My Name Is), thrice played in a bunch of bands in Austin and Athens, GA (The Casting Couch, The Glen Gold, Hi Fi Mastodon), and many times has embarked on experimental theatrical journeys with Tongue & Groove Theatre and The Dialtones. She currently runs The Stuffed Animal Rescue Foundation (thesarf.org), occasionally shoots cans off of her porch from her bedroom with a Red Ryder BB gun, and plays as much volleyball as possible.

She has excellent hand-eye coordination and is intermittently working on a play or novel or mental exercise based on a fictional reality TV show involving advertising, marketing professionals, sadness, the internet, and outer space.

Lindsay Greene designs and repairs all manner of electronic performance gear, including amplifiers, guitar petals, and synthesizers. He played an integral technical role in construction and installation of all three prior collaborations of Gurgiolo and Mitchell, The Silent City, The Quality or Condition, and Calculated Carelessness. Lindsay was responsible for installing motion sensors, programming circuit boards, and hand-wiring Arduino cards to trigger sounds and lights.

In addition, he is a much sought-after musician and can be found playing upright and electric bass with local, national, and international artists including Ray Price, Paula Nelson, Seth Walker, Elizabeth McQueen (Asleep at the Wheel), and Lauren Gurgiolo (Okkervil River).